Guy Trimby (Plymouth Marine Laboratory) in collaboration with Paul Spaur and the rest of the AARR team set to prove that OpenROVs can be used as tools to detect fluorescence in the marine environment, using the Cook Islands as a test bed for this experiment.  Guy developed an UV LED light package, which excites certain proteins in organisms, causing them to emit a different wavelength of light (fluoresce) and often giving off brilliant colors in the process.

A specially filtered Go Pro camera filters and records the light for analysis.  Paul and the AARR team outfitted their ROVs with a special payload setup to carry the system, modified their main LED lights with filters to make them emit only blue/UV light, and filtered their main ROV cameras.

The fluorescence is used in many species as warning signs, for communication, and as protection from damaging UV rays in sunlight.  These systems we re developing therefore have many important implications such as: detecting new organisms and proteins that fluoresce, using said proteins as biochemical markers for use in medical research, and for use in gauging the health of corals and other organisms.

We set up several sites within one of our monitored coral reefs on Aitutaki and proceeded to record daytime and nighttime surveys of each site.  At night it was often difficult to see so we marked each area with glow sticks prior to sunset and used those glowing waypoints to navigate our ROVs out to each one.  We were therefore able to image each focal coral individual that fluoresced both in day and night.  We even discovered a species of clam, the small giant clam (Tridacna maxima), that was not previously known to fluoresce! 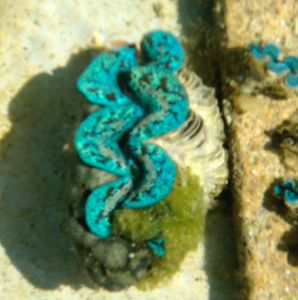 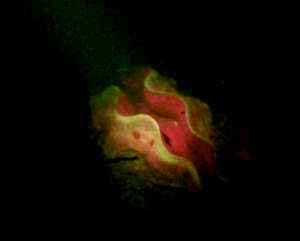 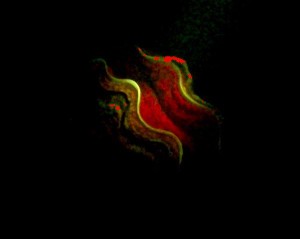 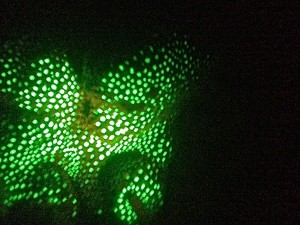