Camarillo, Calif., March 14, 2016— Have you ever operated an Unmanned Aerial Vehicle?  How do you feel about law enforcement using UAVs or drones?  How about universities? Movie studios?

These are some of the questions on a public poll on UAVs—also called drones—that is currently being run by the Aerial and Aquatic Robotic Research (AARR) Group at CSU Channel Islands (CI).

In order to create a clearer and more objective understanding of the technology, the AARR Group is seeking public comment on UAVs or drones through this anonymous link: http://bit.ly/1UtrURG

The AAAR team and undergraduate students from CI’s foundational Introduction to Remotely-Piloted Systems class are seeking to understand more about the potential uses and attitudes toward UAVs (drones)..

Research like this is helping CI to become nationally prominent in the field of UAV education, according to entrepreneurs and other UAV experts, including Florida lawyer and legal scholar Jonathan Rupprecht, who specializes in Federal Aviation Administration issues and drone integration into the National Air Space.

“CSUCI is motivated to become a trailblazer in drones and has started taking steps to set itself apart,” Rupprecht said. “One of these steps is to gather large amounts of public opinion data on drones. This data will be informative to help build the foundation of an interdisciplinary drone education program—but not only that—it will help future students for decades to come.”

Industry iconoclasts like Dan Fetterly of SuperProAerial echo these impressions and see additional, unique strengths emerging within CI’s diverse approach to teaching and research. The Los Angeles-based supplier of heavy lift UAVs for industrial survey and Hollywood applications notes “CI’s unique interdisciplinary approach to integrating science, technology, engineering, art, and math into it’s UAV curriculum puts it on the “bleeding edge” of this rapidly developing technology.  Their approach is particularly suited to their Environmental Studies and Resource Management programs.”

This is the second year the Environmental Science and Resource Management (ESRM)’s AARR team has conducted polls about the rapidly-expanding field of unmanned technology.

“A mere five years ago, the drone sector was either a playground for toy manufacturers and remote control airplane hobbyists or a clandestine, hidden world of military engineers tucked away behind top secret military curtains,” said ESRM Associate Professor Sean Anderson, Ph.D. “It is now quickly becoming a massive sector touching on everything from agriculture to construction and conservation to package delivery.”

Anderson says he hopes a better understanding of the technology will help his students and UAV team responsibly foster the opportunities unmanned technology offers while minimizing the potential downsides.

“Disney is filing patents. College students are filing patents,” Anderson said. “We are San Francisco in 1850 with all kinds of Easterners daily arriving at our docks wanting and expecting to strike gold. But there is far too little perspective on this technology and industry.”

The poll will remain open until April 20. 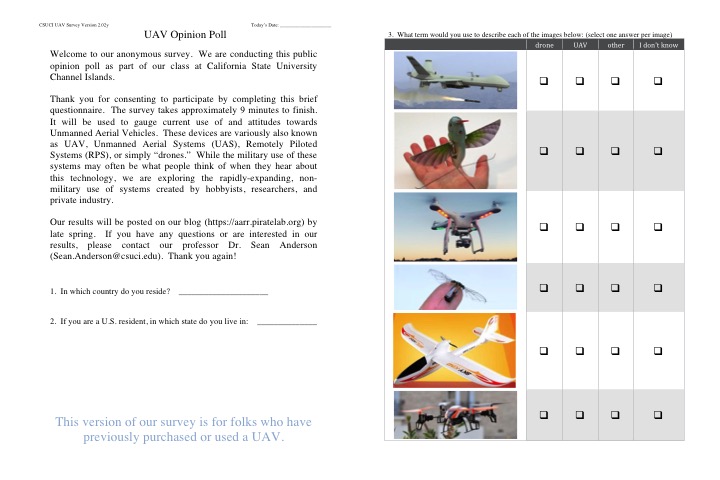