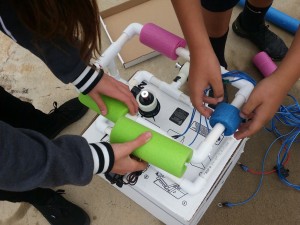 It all began with a box filled with PVC pipe, some dedicated AARR students from our B-WET-funded Crossing the Channel Mentoring Program at CSUCI and the very curious students of Robert J. Frank Intermediate School who participate in Ms. Meza’s Oceanography classes (4th and 7th period).  For two weeks this past month, these students learned the history of unmanned underwater exploration through the use of Remotely Operated Vehicles (ROVs) and how they are helpful for conducting scientific research in areas that are difficult or dangerous for SCUBA divers to reach. This enriching information was presented to aid them in developing ideas for their own research with this technology. 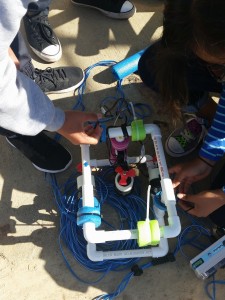 Buoyancy, Center of Gravity and its effects on Stability were all the rage by the end of the first week. These amazing students broke up into teams and constructed the frame for their own ROV, discovered the physics involved with weight and flotation and started applying their knowledge to the construction. 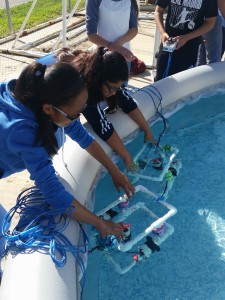 Everything was about Positive, Negative and Neutral buoyancy for the start of the second week.  The students can be seen attaching flotation after they mounted their motors to their submersible vehicles.

Control and Operation created a little fun chaos.  As seen in the video at the end it wasn’t long before they were up and running their vehicles.   The students held a friendly, timed competition that started by descending to a position in a quadrat and then manuevering their vehicles through two hula hoops suspended in water.  They then navigating to a pole that simulated a pier pylon which they would face for a photo stop an then descend into a quadrat on each side of the pole.  After the students completed these steps they returned to their starting quadrat.  The top two teams will get to take their ROV to Santa Rosa Island and deploy them at the pier in upcoming weeks! 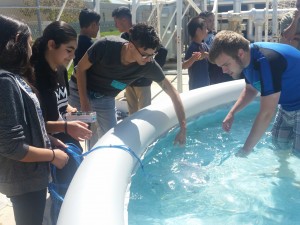 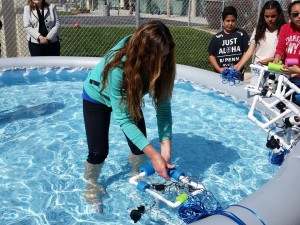