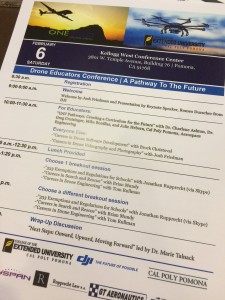 This Saturday CalPoly Pomona hosted our first-ever North American Drone Educator’s Conference.  Folks from across California (and a few from further afield) gathered on a warm Saturday afternoon at the Kellogg Conference Center in Pomona, California to discuss a myriad of aspects of teaching students to create, use, and become otherwise professional members of our burgeoning UAV community.

Why an “Educator’s” Conference?

Those of us who have been working to professionalize the use of Unmanned Aerial Vehicles (UAVs) have accumulated many arrows in our backs and a surprising number of battle scars over the past few years.  Taking new ideas into academia sounds like something easy and natural; Isn’t that what a university is supposed to be about in the first place?!?  But when it comes to new technologies and systems that are so different from our common experience AND that interact with folks outside of the confines of our campuses in potentially revolutionary or disruptive ways, caution and trepidation are the norm.  “Just wait around until other people have figured it out, have made all the standards, defined the debate, and then we will just follow them,” is the increasingly common response from administrations (especially the risk management folks) and those in charge of setting policy.  The response many of us trying to interject UAV efforts into formal educational programs have received is either crickets chirping (from the non-confrontational folks) or “wow, let me study this and have our lawyers look this over” (a mantra repeated for months or years on end).  When some kind of answer other than an outright “no, you can’t do that” pops into our email inbox, it is most often, “Can you please send along some examples of other programs that are doing this now?”  And therein lies the rub.  With so many apparent reasons to avoid the perceived headache of diving into the deep end of the UAV pool, committees and administrators charged with approving new curricula want to see a tried and true model of effective UAV education.  (I am so grateful to have already passed through those hurdles at my own institution.)

Into this breach, Josh Friedman (owner of One Zero Digital Media and faculty at Golden West College in Huntington Beach) had the great idea of convening a conference wherein educators could learn from each other and network with a host of experts with a range of skill sets: lawyers, administrators, environmental scientists, video artists, manufacturers, etc.

We kicked off the conference with a wonderful keynote from DJI‘s Romeo Durscher.  Romeo, Director of Education at DJI and the founder of DJI University, ran though his own background and called for pushing STEAM rather than STEM educational experiences.  He next turned to an amusing exploration of the rhetoric of UAVs in the popular press and a comparison of the public perception of UAVs in the United States relative to just about everywhere else on the globe (note: if you are interested in this, see the results of our annual poll of attitudes surrounding UAVs that we will release later this Spring).

He then moved to a litany of recent examples of UAVs pushing the boundary of what people typically think of as traditional UAV activity.  Examples included using drones to transport human organs, fight fires, respond in the wake of natural disasters, and so forth.

He concluded his keynote with a neat, eye-candy example of the new perspectives UAVs can bring to traditional approaches of telling stories.  In 2015, he was part of a support team for ABC’s Good Morning America live broadcast from the world’s largest cave, Son Doong in Vietnam.  While it wasn’t particularly impressive on the Kellogg Center’s screen, the actual video is awesome (see below).  All in all, a fun presentation of our current state of affairs with UAVs and of their potential value for education. 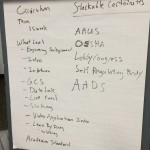 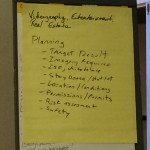 My biggest disappointment with the conference was the general lack of folks currently teaching UAV-based courses.  Our Channel Islands classes (note, our class website is under repair until Monday) and CalPoly Pomona’s Extended Ed course (actually taught by Brock and Vinny and their crew from FlySpan) were the only ones much discussed.  I was very happy to learn about other programs that I was woefully ignorant of, especially the interesting freshman level course at Palomar College (in north San Diego County), and a plethora of courses in the works from everywhere from Redlands to Los Angeles City College.

We had a very interesting curriculum brainstorming session that didn’t produce any curricula per se but provided a stepping stone into a good discussion about what we would all like to see from such programs and courses in the future.  I think my personal highlight from this part of the conference was the straight talking challenge to academic programs from 3DR‘s Greg Crutsinger (a self-described recovering academic).  He dared us all to get with the program (as the rest of the world is doing) or be left in the dust.  From notions that you need not spend a gazillion dollars on equipment to get into the UAV game to over concern about legal restrictions to pushing for practical skill sets, he really provided the jolt that got our conversations off to a fantastic start.

A satisfying time was had by all (or at least most) by critiquing…that’s the polite way to say it…the FAA‘s ostensible “rules” for “safe” UAV operations.  Several lawyers in attendance such as Erick Larsen provided some useful answers in the wake of the fantastic pre-recorded discussion about 333 Exemptions and Educational Institutions by Jon Rupprecht.  His Rupprecht Law firm has the second greatest number of 333 exemptions granted to date and this certified pilot is a recognized national expert on UAV use and FAA regulations.  It was a fantastic session.  I hope Josh will be posting this recorded presentation soon.  Regardless, I will be posting Jon’s upcoming presentation to our ESRM 370 class here at CSUCI within a few weeks (check back in late February). 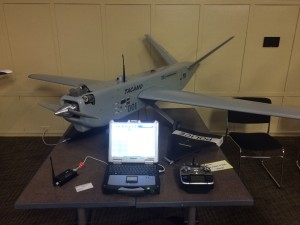 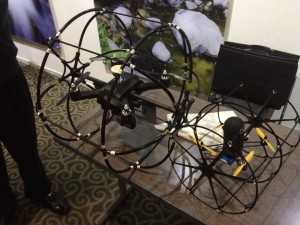 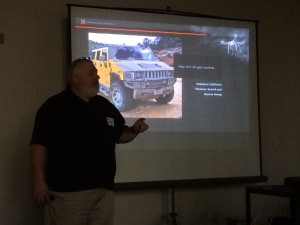 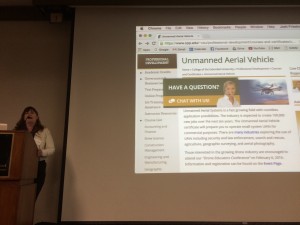 Of course the best part of meetings such as this are bumping into old friends, making new ones, and deepening our networks of colleagues.  Highlights for me were getting to meet some colleagues in person I had only known virtually (like 3DR‘s Greg Crutsinger and UC Merced‘s Brandon Stark), folks I had not seen in a while (FlySpan‘s Brock Christoval), and folks I just happened to plop down next to for the next session (like 333 Lawyer Erick Larsen and Helicopter pilot Ed Story).  My colleagues, students, and I are all better positioned in the wake of the folks we met at this conference and can’t wait to keep those conversations going.  I’m looking forward to our next get together and following up with several new colleagues in the weeks ahead.  Now get out there and get back in the proverbial trenches!