After having a successful trial of the bio-fluorescence sensor package for the ROV, we made some adjustments to the payload. We improved the balance and the lights and did three 50 meter zig-zag night transects into the patch reefs, and found a lot of fluorescence! The system and collaboration with Guy Trimy/PML has worked out just as planned! 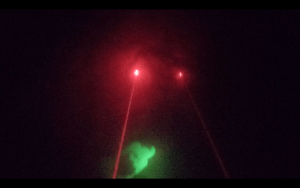 In addition to just proving we could find fluorescent corals, we set out to identify which specific species do. We sought out, marked, and characterized 8 sites during the day light outs, and then sent out our further modified ROV at night. Unfortunately we were met with a heavy tide, and the darkened main lights proved to make navigation to the sites nearly impossible. We removed the yellow filter from the main camera, but it was not good enough to properly navigate.

Unfortunately time is running short, and we have a lot of work to do. The equipment arrived late, broken, and the weather has taken a turn for the worse. There has been a storm moving in, which has made progress difficult. Tomorrow the team will split up, half will go to the Aitutaki lagoon via boat and do surveys of the reef, and the other will work on mapping until the evening. At dusk, the team will reunite and remark the coral sites with glow sticks, and go for another night dive!