After further investigation, we found that many of our ROVs had several small nicks in the wires. This allowed salt water to enter the plastic jacketing which corroded the wires. Some were corroded all the way into the electronics capsule, which necessitates replacement of the wiring harness. At this point we only have enough spare parts to get three of our five OpenROV’s completely operational. We always leave a spare ROV behind in case something happens; we also do a lot of educational outreach, and having non-functioning units makes that difficult.

There is a lot of work ahead for the team, replacing an entire wiring harness is one of the most time consuming portion of building an ROV. Since we only have one additional wiring harness, Leviathan will be receiving the transplant, along with our trial of a DIY neutrally buoyant tether from poly rope, which was donated to us by a volunteer with our team.

Our team leader Paul has been hard at work with 3D modeling and printing: finalizing the design for his payload rail, making parts for the tether reels, and making adapters to fit Guy Trimby’s florescent coral detecting LED payload to the ROV, and finishing the new tether reels.

Thanks to team member Chris, we were able to finish the repairs to Leviathan and it booted up successfully! There are only two items remaining before the ROVs are ready to their journey: building one more tether reel, and testing both units thoroughly!

One of the last things that Paul needed to finish up his aerial mapping system, was to set up a First Person View (FPV) camera system. Paul wears glasses, and because of this, he had a difficult time finding a set of FPV goggles for flying. After trying a set that that did not fit, which was supposed to be made for people with glasses, he decided to construct one from a welding helmet! 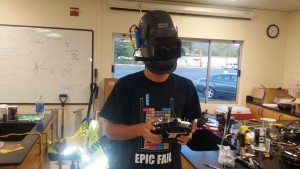