The realization of an epidemic of police violence, racial/economic inequality, and deep-seated divisiveness across our country that has been growing for the past year and half exploded last night in Dallas.  The soul searching and groping for ways to move forward has been helped along thanks in no small part to technology. 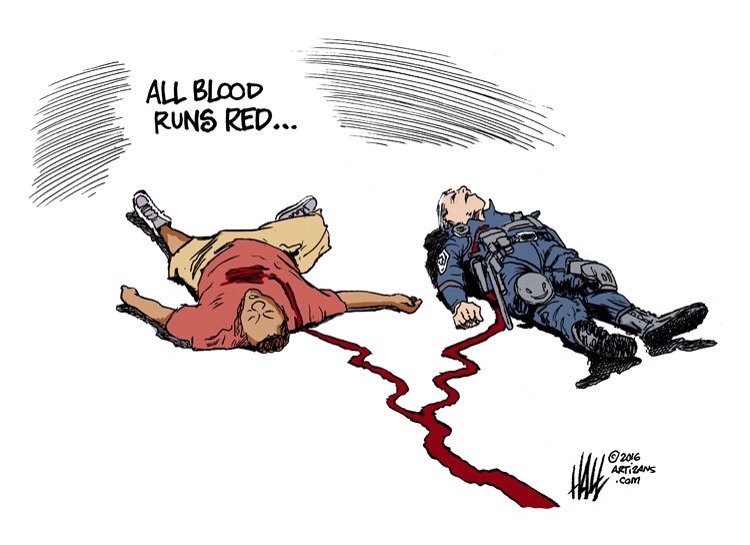 Given the lack of good, nation-wide data on police shootings, we have been forced to turn to media outlets and advocacy groups who have recently begun to establish their own datasets to explore this phenomenon objectively.  Arguably the best of these is the Washington Post’s database (their 2015 data is freely forkable on GitHub if you’d like to explore it yourself) which suggests that police officers kill an average of three Americans of all stripes per day and disproportionately kill unarmed black folks.  This Washington Post tracking of such violence only began in 2014 and as of today only extends back only to 2011.  And while it covers all police shootings (suspects who pulls out a gun and shoots at officers, bystanders accidentally hit by stray gunfire, etc.), the rate appears to be going up. We know that this phenomenon didn’t begin in 2011.  The drivers of this violence are legion and rooted in systemic racism and inequality across our country’s historical arc.  But the real reason this dialog has come to widespread attention in the past year and half (and especially this past week) is the ubiquity of cheap but powerful technology in the form of cell phones and their associated ability to record events as they unfold.

Access to technology (especially high technology) is increasingly being viewed as a civil right and fundamental to our first amendment rights as Americans.  Both individual technologies (e.g. RFID, Bluetooth, 4G cell phone networks, satellite data transmission, fantastically high resolution cameras) and ways of sharing ideas and information (e.g. social media and novel streaming platforms) are common and increasingly user friendly.  Our friends in places like Russia and El Salvador harassed by their local law enforcement forces rarely use such tech to hold security forces accountable given the blowback that routinely ensues.  But those of us in western democracies do indeed have access to this tech and have increasingly grown comfortable with generating and consuming media products from this personalized tech over the past two decades.

I think most of us see technology as a ratchet.  A one-way street that will only tend to get better.  This is at best a pipe dream.  Indeed, tech companies are busy right now experimenting with ways in which to limit the utility of their creations in certain settings.  For example, Apple has recently filed a patent for infrared signal-based disabling of your iPhone’s camera.  The idea here is to help stop the dozens of folks surrounding you at that concert from recording that oh-so moving ballad or kickin’ jam.  But in the hands of your local law enforcement (like this guy) or phone company (like mine), we can easily see how this or similar such anti-recording tech can be used to block citizens from freely exercising their ability to document events happening to them or their community.  Such developments are things we all need to pay attention to.

But the real technological leap “forward” last night wasn’t the ability to record an event or spark interest in it.  It was the ominous use of new tech to end it. While information is still pouring in about the particulars of last nights’ insanity of a sniper attacking police and protestors at a non-violent march (12 people were shot, five officers were killed) in Dallas, it has now become clear how the threat of additional violence ended.  After the initial shooting spree, the sniper apparently holed up in a parking garage and threatened to detonate bombs.  He stated “the end was coming” and he was hoping “to kill white people, especially white officers” according to Dallas Police Chief David Brown.  Understandably feeling they needed to end the standoff quickly, Dallas Police strapped their own explosive onto an articulated arm of one of their robots typically used to detect and dispose of bombs. They then drove it up to the hiding sniper and killed him with a controlled detonation of that explosive.

As far as I can tell, this appears to be the first use of a robot to intentionally kill someone in the U.S., certainly by a police force.  Peter Singer told Gizmodo the only thing that could vaguely be considered in the same category was an “accidental case in [Tennessee], where [a] tear gas canister shot during a standoff accidentally started a fire that burned down a mobile home.”  We should note that no one died in that instance.  Regardless, the consequence of this use is clear: remotely piloted systems are now part of the mix when in comes to the array of deadly force options considered by law enforcement. 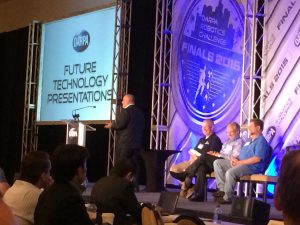 To be sure, police forces will not go out and start blowing up suspects tomorrow.  Indeed during last summer’s Robotics Challenge Workshop we attended after the DARPA Robotics Challenge Finals in Pasadena, former fire chief and current Deputy Under Secretary for Science and Technology at the U.S. Department of Homeland Security Robert Griffin pleaded with our audience of roboticists to please focus on reliability of the platforms we were creating.  He noted that “you need to keep it real simple for us…that fireman or that officer doesn’t have a Ph.D. in electrical engineering” and that the biggest hurdle we need to solve before robots play a larger role in first responder settings is simple reliability.  “Until a fireman can grab one of these suckers, drive it up to the house is question, and have it work almost 100% of the time, we can’t really use it” he added.  Indeed, our Ventura County Sheriffs Department has an array of ground-based and aerial robotic technology, but rarely brings those technologies to bare on day-to-day problems both for reliability and for public perception concerns.  This is the case even though our County Board of Supervisors approved the use of such technologies prior to the department ever seeking to acquire them AND the fact that more than 94% of Ventura County residents and people across the U.S. strongly support the use of robotic technology by such first responders (see our soon-to-be-released national polling results next week).  But apparently we don’t need a sophisticated unit to kill folks.  An RC car and a roll of duct tape is essentially all you need if you have access to a explosive. And as I have seen for the past 20 years with mountain lion management here in California, when confronted with a stressful, novel crisis situation, law enforcement officers often rely on Googling news reports for how the last law enforcement agency responded to such a crisis and often simply emulate that previous approach.  Hence, I think it is likely that robots will increasingly be seen as a means to project lethal force in crisis situations across our country (and I’m not the only one to think so).  Add to this mix our breaking wave of increasingly powerful and available small Unmanned Aerial Systems (sUAS) and we have likely crossed the Rubicon last night in Dallas.  God knows, our aerial drones have already crossed that lines in warfare (e.g. with ISIS, U.S. Military, and across world).

Ultimately the technologies to document events and usher in their conclusion are in our hands.  Rarely do things go well when we let the purveyors of these technologies do whatever they want unscrutinized or unmoderated.  Now is the time for not just a wider discussion of police practices and social justice.  It is also the time for continuing the discussion of the importance of technology and what we as a society consider the appropriate or acceptable uses of various technologies.  These discussions are no longer (if they ever were) separable. Carl Sagan said it so well in 1997’s Demon-Haunted World:

Confronting and growing beyond violence need not be tied to technology, but in the world we have grown for ourselves, it is hard to see how to separate the two. Here is to all those who feel the boot heel of injustice and those who try to do the right thing day by day.

See these subsequent stories that were published after my original post.

Note: The above video was not rendering properly in its original form so I have posted this lower-res version via my YouTube.  You have may have better luck with the original and are welcomed to view that HD version of this video (here) from NBC’s Nightly News evening broadcast on July 8, 2016.

How the Dallas Police Used an Improvised Killer Robot to Take Down the Gunman (The Intercept; July 8, 2016)

Why A Killer Robot Was Likely The Only Option For Dallas Police (Wired; July 8, 2016)

I Have Absolutely No Problem With the Dallas Killer Robot (National Review; July 8, 2016)

Bomb Robots: What Makes Killing In Dallas Different And What Happens Next? (NPR; July 8, 2016)

And because some have asked, here are a few relevant historical pieces I have previously shared with my students.  These provide takes on the “killer robot” angle, mostly revolving around the ethical/legal debate surrounding the (potential) large-scale deployment of more autonomous platforms designed to kill people.

The International Community Is About To Debate Killer Robots (Popular Science; April 11, 2016)